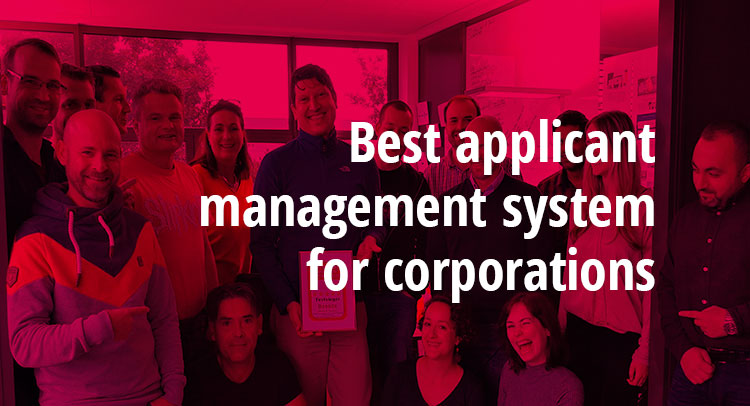 First a panel discussion, then an awards ceremony at the Zukunft Personal Europe 2019 in Cologne

18/09/2019 – the day we had been waiting for. Zukunft Personal Europe 2019. Hall 3.1, Future Stage Recruiting. All of the seats were filled to capacity as the panel discussion “Applicant management systems, AI, and other tools – what’s reality and what’s hype?” started. Moderated by Raoul Fischer (W&V), our Product Manager Tania Teetz and two other software manufacturers talked, alongside one representative from the customer side. 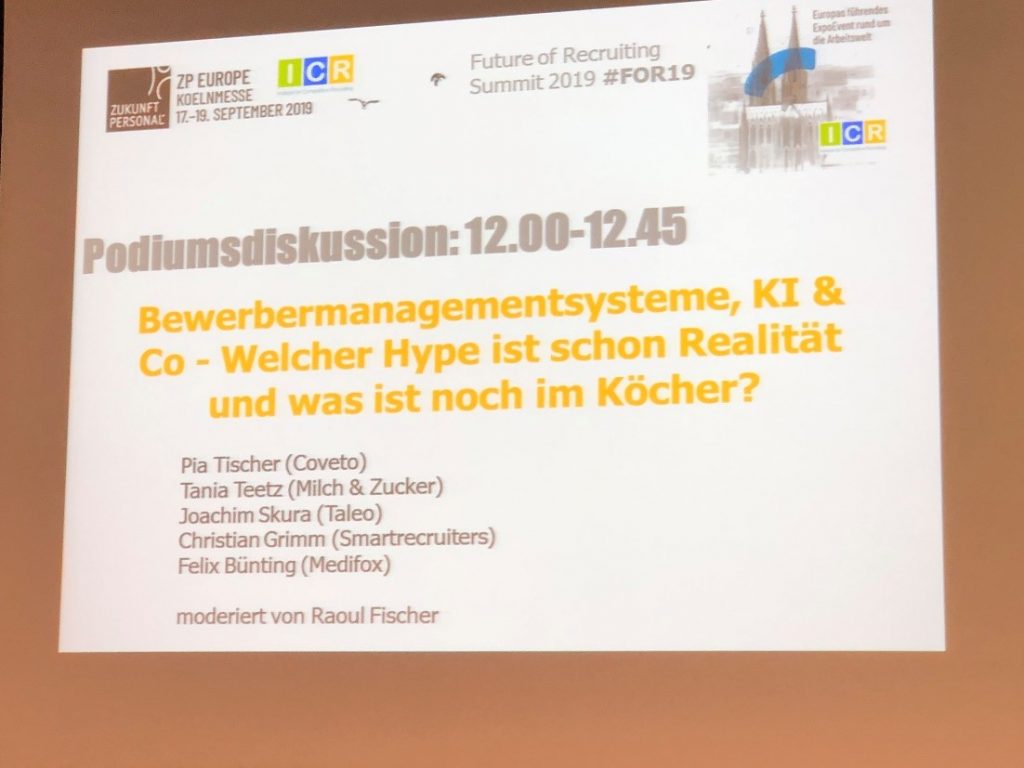 . Panel discussion at the ICR by Wolfgang Brickwedde on the second day of Zukunft Personal Europe 2019. © Christian Asche

Two of the key topics were:

What are the expectations faced by e-recruiting software providers, and how can they fulfil them today and in the future?

The answers can be summarised as follows: whether companies are large or small, they all want to have a fully digitized recruiting process, including talent relationship management. Automation isn’t an end in and of itself, but instead supports the work of HR. Especially when many applications are received in some professions, it is important to have a way to give applicants fast feedback on whether they have been accepted or rejected. 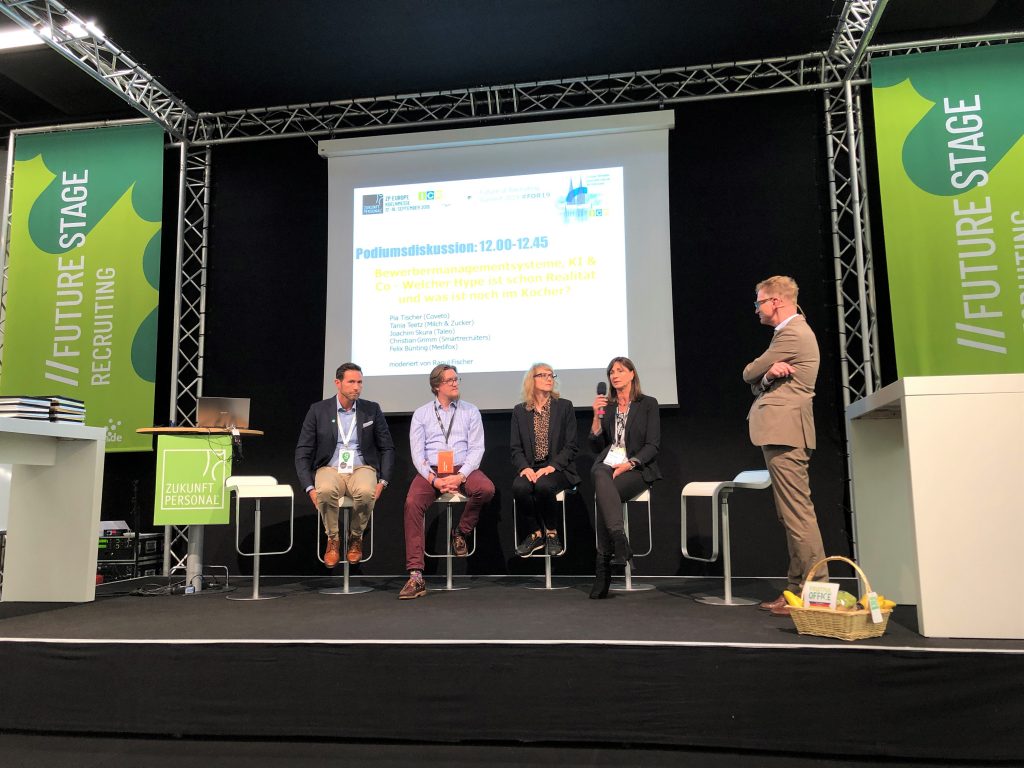 What is hype, and what is reality? What role do chatbots, algorithms and artificial intelligence play in recruiting?

Real AI is still in its infancy in the recruiting field. Where AI is used, it often consists of only rule-based algorithms. A little semantics, maybe natural language processing as well. But machine learning, or even deep learning? We’re still at the starting line. That became clear at Zukunft Personal Europe 2019. HR professionals need to get more familiar with the topic, but there’s no reason to make yourself crazy over it. It’s also not easy to answer the question (posed by an audience member) of whether the USA has surpassed Germany in terms of the topic. Instead, it seems that large companies have a leg up on smaller ones.

Chatbots do work, and are used by many companies. But as a brand new study from Bayreuth University and Stefan Scheller on the candidate journey among students showed: Applicants find chatbots too impersonal. They can serve to provide marginal information, or quick initial info. We are researching alongside the RheinMain University of Applied Sciences for the project “Chatbots In Appliant Tracking Systems” (CATS). In the future, chatbots may become so good that students prefer to work with them. The idea is to consider all of the process phases involved in applicant management to give internal company personnel support. This could include, for instance, automatically detecting metadata in job advertisements (entry-level, etc.) and improving the texts of job ads.

It gets even better: four-time test winner!

Right after the panel discussion, Wolfgang Brickwedde once again presented the test winners of his manufacturer-neutral study “Best applicant management software in Germany”. The best of 160 applicant management systems received awards in different categories. Over 1,200 companies took part as customers in the study to evaluate their different recruiting systems. Our BeeSite Recruiting Edition took first place in the large company category (over 500 hires per year)! We even beat out Haufe Umantis and SAP Successfactors, which had to console themselves with second and third places. More information on the study and the seal of quality is available at: http://competitiverecruiting.de/Deutschlands-Beste-Bewerbermanagement-software-2019-2020.html 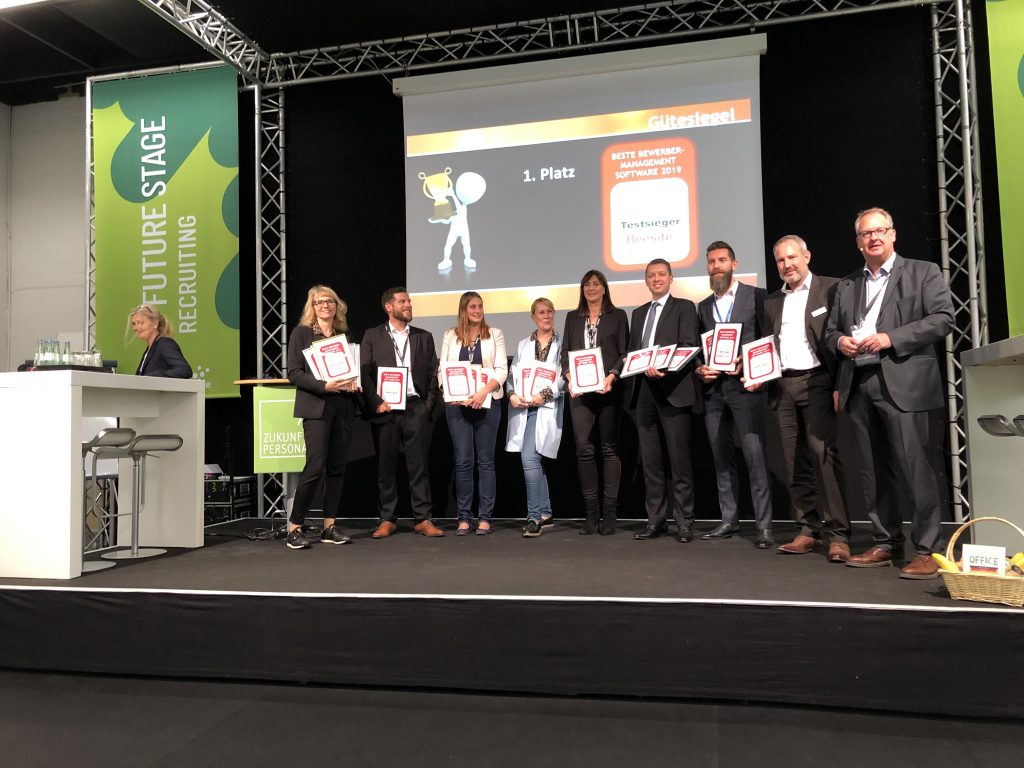 This is a great incentive for our product development to keep on the same track. We are proud of our satisfied customers, and would like to thank them warmly for their participation in the study. We believe it is our duty to continue developing BeeSite in the same vein over the coming year. 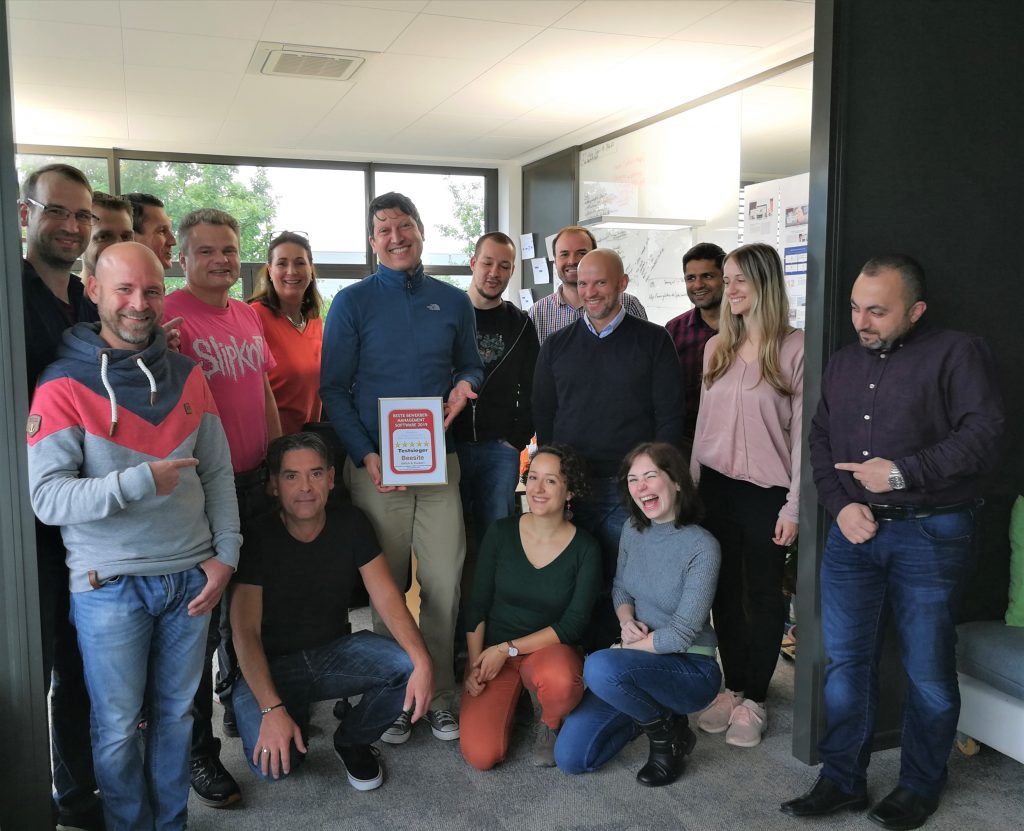 The event took part during the three-day Future of Recruiting Summit by the Institute for Competitive Recruiting (ICR), as always professionally and capably organised by Wolfgang Brickwedde.