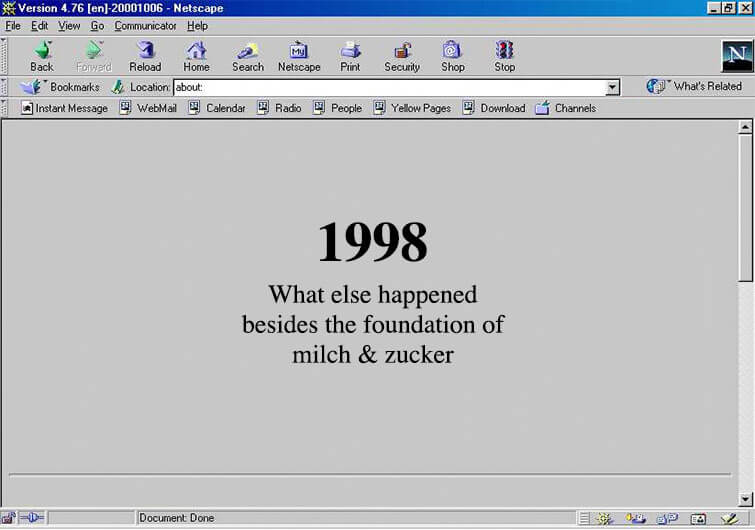 posted by Christian Deiters
categories
1998, the year in which our communication and software hearts began to beat together, the year we saw the light of day as a company. Although rather short names such as Lea, Julia, Jan and Tim were trendy at the time, our company name of milch & zucker was quickly decided on (how it came about, read here). At the time, we looked at the world from the same fresh perspective as Google, because even this now reasonably successful company was founded in 1998 – not in Bad Nauheim, but California, which is supposed to also be very nice. Reminiscing on the occasion of our jubilee year, we remembered what was going on in the world 20 years ago.

From affairs to Viagra

Looking at events from that year, you cannot overlook the three big headlines: Bill Clinton and his affair with his intern; the end of the 16-year-old Kohl era due to Gerhard Schröder’s victory and the approval of Viagra – the “blue miracle”. The last two points also marked the top 3 words of the year 1998 with “red-green”, “Viagra” and “new middle”.

But besides these dominating topics, other exciting things happened at this time: For example, in Brussels, the Euro was introduced (even though the Deutsch mark had just celebrated its 50th birthday) and, as a result, the European Central Bank (ECB) was established. There were some highlights in the field of technology as well: Windows 98 was released in March; Apple introduced the iMac and the Nokia 5110, still legendary today, went down in history as the most successful cell phone of all time.

From a sports point of view, it was not that different at the time – France became the world soccer champion, Germany embarrassed itself a bit in the World Cup and, despite Lothar Matthaus’ comeback, Germany was already out by the quarter-finals. It was a different story for the First FC Kaiserslautern, who became German champion as the first league climber in football history.

From the New Beetle to Bailando

With the number 1 single, “My Heart Will Go On” by Celine Dion and being awarded eleven Oscars, the movie “Titanic”, which was released in Germany in January 1998, is still one of the most successful films in movie history. Other films released that year included “The Truman Show” starring Jim Carrey and “Rush Hour” starring Jackie Chan. In terms of series technology, in addition to the premiere of “Sex and the City”, the still-popular sitcom “Friends” has to be mentioned, which by 1998 was already in its fifth season.

Also in the automotive industry, a new star emerged as the new VW New Beetle – a worthy successor – somewhat sidelined the legendary VW Beetle. Other than that, there was not a whole lot going on: Pig’s ear was mushroom of the year, and Unke was dubbed animal of the year. Pet(s) of the year were the ever-popular white-horned Heidschnucke (sheep) and the good old German shepherd dog. Julia Roberts continued to rake in awards, Modern Talking made a comeback, Guildo Horn loved us all, doctors declared all men to be pigs, Loonas Bailando rang through all the discos, Bill Gates got a cake in the face, Verona Feldbusch started to moderate, sing, model and, most of all, to talk and Giovanni Trapattoni is either still raging or has actually stopped.